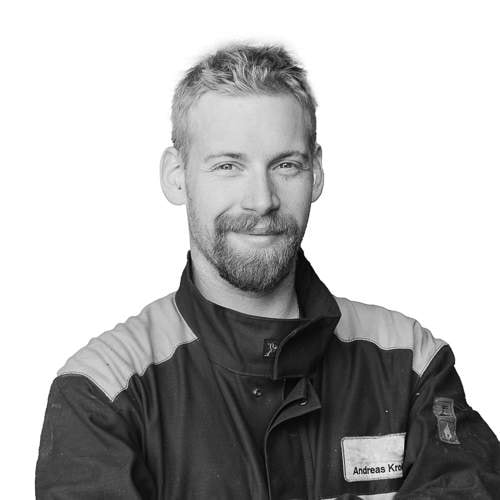 I like this, but mayby I will do something else in the future

Welding is a accurate job, and its tough for the body

”Even the good advices from the physiotherapist doesn´t always help, because you can only weld in one or two positions. If it´s a tight spot, you have to get in such a position, that you have a steady hand, even though it is not optimal for the body. When welding upwards, it is necessary to take additional breaks, because it is tiresome for the hands. The worst is when the outer temperature rise to 30 degrees Celsius, because the fireproof welding clothes are not breathing very well.”

Andreas Krokfors is a welder that likes his job, but it isn´t easy. Or at least it is hard for the body. “When I have welded the hole day in a really awkward location, I can really feel it in the body in the evening.”

The family father doing his best

As the saying goes, “If work were a delicacy, the masters would do it themselves”. Would Andreas have belonged there, if he had made other decisions?

”At least I could have ended up as an engineer. I started my mechanical engineer studies in Vaasa after graduating high school and my time in the army. After a couple of years in the University, I found out that theoretical studies didn´t correspond to what I wanted from life. I would probably have finalized my studies if I would have made another decision.”

The decision was perhaps also affected by Andreas meeting his fiancée.

Today, Andreas has a lovely wife and three children. He started to work at Indola industrial area in his native town Kokkola. His job was at Limetec, a company within the logistic field.
He worked for two years, but due to the economical recession, he was dismissed.

When one door closes, another opens.

Andreas had already before heard about Kewatec, and actually already once before applied for a job at Kewatec. At that time, there were no free vacancies.

He got a new chance after performing a special course and receiving his welding certificate. He had learned to weld already as a teenager. In January 2010, Kewatec looked for more welders, and Andreas – now officially competent – was hired.

From boat driver to boat builder

Andreas did not choose Kewatec only because there was an open vacancy. The interesting part was the boat building, because Andreas has grown up with boats by the shore. In the summertime, he spent his time at the summer house in the archipelago, and the sea has always been an important part of his life. The family also once had a boat, big enough for them to travel abroad to Sweden.

” Now I also have a small boat with my own family. It is a partly covered hardtop boat with an outboard engine. I have no experience with sailing boats, but perhaps we´ll invest in a bigger motorboat in the future,” says Andreas.

At Kewatec, Andreas is welding hulls. “Normally, my part of the welding is from start until the hull is ready for the deck equipment to be welded on. Sometimes, I continue with the equipment welding until the boat is ready to be painted.”

At the welding production, the welders are working in teams, and the team members have separate duties. Anyway, the production work like an assembly line. Every boat is unique, even though the base construction solutions and the task challenges are the same. “And everything is not always engineered so well, that the solutions never could be adjusted”, says Andreas.

Challenges are part of the everyday work

The various welding tasks and the challenges keep Andreas sharp and motivated. Every Kewatec boat are built according to stringest work boat criterias, even when the boat will be used by private or non-commercial clients. The welding work always need to be of superior quality.

“I am not always satisfied at once. Sometime, porosity in the welding seams could be causing headaches, but we have always managed to get it done. Anyway, that is normal challenges, which belongs to the job”, Andreas reflects.

The challenges faced at work are carried by the whole work community, no one has to take them alone. “We have a good work team. Of course, everyone is not having the same opinion in every issue, but that is not a problem, and that´s also not the intention. With benevolent humor and a positive attitude, we stand together as a team”, Andreas assures.

We always try to make things a little bit better

However, ‘better’ is the enemy of ‘good’, according to the saying. Andreas is stating that the development proceed thanks to constructive criticism. If you think that everything is good, there can not be any improvement. And, when it comes to the kind-hearted Andreas, we are sure that the criticism is not causing any harm, but rather improve things.

Maybe Andreas own reflections about his future also point at some kind of positive self-critisism. “My wife has continued her education and re-graduated, and I have asked myself if I really like to be welding boats until my retirement. Maybe I will learn a new profession. I am not getting back to the mechanical engineer studies, but I don’t yet know what it could be”, Andreas says.

Well, he is just above 30 years old, so he still has time to consider interesting and motivational future plans. Walking the dog and taking a ski-tour are good ways of counterbalancing the tough work duties. Andreas and his family do also enjoy travelling, sometime to some south and warm place, sometime they head up north for the cold.